You are here: Home / Android / Royal Ride Battle Heroes available for pre-registration on Android in Asia and America

At the end of last year, the publisher NetEase presented as many as 2 royal battles: the fantasy King of Hunters and the more familiar Ride Out Heroes (but also with fantasy elements). The latter has now become available for pre-registration, but only for players from Asia and South America.

Ride Out Heroes is a royal battle where players can choose a character from one of several classes and explore the world with fantasy elements. For example, you will be able to travel the world by car or dinosaur, and among the weapons are presented both traditional firearms and a bow with arrows.

Read Also: What is Apple Arcade and why is this service Mast-have for gamers?

At the start, five characters are expected, each of which has its own advantages over the others, and one card. Over time, promise more content. 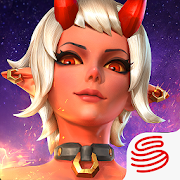