You are here: Home / Android / Marginalia Hero is the most unusual RPG for iOS and Android this year

The publisher Crescent Moon Games has long shown its viability, which allows it to work including on experimental projects, supporting indie developers. One of the latest games is a strange RPG called Marginalia Hero.

This is an arcade role-playing game, where the main focus is on visual design. The project was made in the style of medieval marginals – strange and wonderful drawings and manuscripts of the time.

In the game, you have to fight with different creatures and monsters, which were created by artists who lived more than 5 centuries ago.

The developer has prepared 200 levels, more than 70 items, a simple one-finger control in a vertical orientation, powerful bosses and achievements for particularly demanding players. 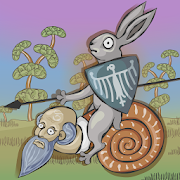